Lake Erie is renowned for its world-class walleye fishing.  There may not be a better lake in the world to target walleyes.  Captain Dean Cushman of Teachin’ Fishin’ and Hard Core Charters agrees.  “It is a fantastic spot to go for walleye. It’s hands down what it’s known for.  But there’s a hidden secret. The steelhead fishing on Lake Erie is phenomenal. Especially in mid-summer.” 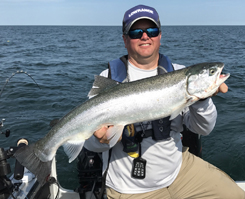 It wasn’t always that way.  Lake Erie was once heavily contaminated.  People wouldn’t eat fish from the lake. But cleanup efforts and help from some unwanted visitors has turned Lake Erie around.  It’s now one of the cleanest lakes in the United States and the fishery has never been better. “We’ve had some of the invasive species come in.  They bring their ills with them but one thing we’ve had is the mussels, the zebra mussels and quahog mussels. They’ve really cleaned that lake up.”

Captain Cushman details his experience with Lake Erie steelhead fishing on Episode 5 of the Great Lakes Fishing Podcast.  The steelhead bite he usually targets is current dependent.  “I fish a lot on the Canadian shoreline. When that cold water starts to creep around the north shore, the steelhead come in, follow the bait, and really come in.”

Cushman usually targets steelhead from Erieau or Wheatley.  The key is cold water pushing smelt into the area. “What makes it really good is when the summer currents set up and the eastern basin pumps cold water along that north shore.  As soon as we see the cold water come up, the coldwater bait comes up, and then the steelhead follow right behind... They’re aggressive predators.”

Walleye is usually the focus early in the year but as the dog days of summer roll in, the steelhead fishing takes off.  “It’s kind of a mid-summer bite, July and August. As you get into fall, the fish start to migrate toward the river mouths to spawn.  A lot of those fish are residents of Ohio. They spawn there and come back. All summer they follow the bait but there’s that seasonal movement of south shore to the north shore and back to the south shore.”

Cushman covers a lot of water.  When trolling for steelhead, speed isn’t a problem.  “With steelhead, you can’t go too fast. I’d probably start at 2 to 2.5 but you can probably go to 3 to 3.5.  You can’t outrun these fish.”

Once you hook one the show begins.  Steelhead are known for being acrobatic fish.  Often times you see fish on the line before the rod shows any signs of a bite.  “They’re ferocious on the line. They don’t peel a lot of line off like a king salmon but they are out of the water a lot and that’s kind of the challenge to handling the big fish is figuring out as an angler how to keep them in the water.  Every time they jump, your chances of landing them probably go down 50%.” 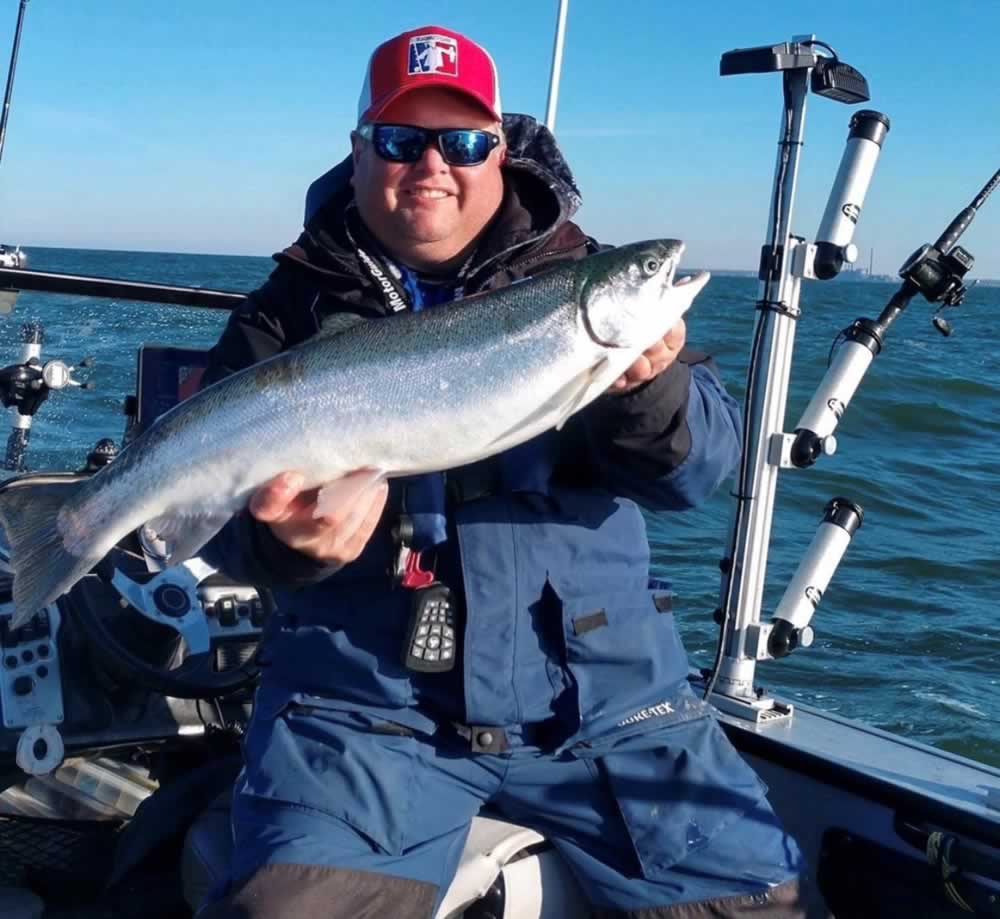 Cushman says keeping fish on the line all the way to the net comes down to rod positioning.  “A lot of anglers, especially new anglers like to keep the rod high at the 11 or 12 o’clock position.  What they’re doing is actually pulling those fish to the surface and as soon as they come to the surface they want to jump.  Good rod management, and this goes for a lot of fish, is to keep the rod horizontal to the water, even keeping the rod tip down into the water.  We want to keep those fish low. That goes for walleye fishing too. If you get those fish to the surface, especially a big fish, they’re going to thrash.  As soon as they thrash, they’re going to throw hooks.”

When the bite is hot, there is plenty of opportunity for netting fish.  “It’s 10, 20, 30, even 40 fish a day when you’re on them. The fish are so aggressive… They move around a lot.  You can’t predict them from day-to-day, where they’re going to be. You gotta go out and actively search for them.  Once you find them, they’re going to be active. Get something in the water and figure out your program. Usually, it’s fairly quick to figure it out and you’re going to start putting fish in the boat.

To hear the entire conversation with Captain Dean Cushman, press play on the podcast player below or go to the Great Lakes Fishing Podcast on Apple Podcasts or Stitcher.