Captain Dan Keating has literally written the book on fishing for king salmon on the Great Lakes, actually several books.  Keating On Kings is thought by many to be the bible of Great Lakes salmon fishing.  He’s spent a lifetime on Lake Michigan and started his charter business in the early 1980s.  Keating is often a featured speaker at salmon schools throughout the region.

His love for fishing the big water started early in life.  “I’ve always been passionate about water and being outdoors.  I grew up in the suburbs of Chicago.  My dad had a 17-foot Boston Whaler.  We would go out and we would spend our weekends fishing.  We would move around from the bottom of the lake from Indiana, Illinois, Wisconsin, all the way up to Door County.  There’s something about chasing a fish that hits really hard and can dump a couple of hundred yards of line off your reels.  All that blue water out there is kind of mysterious and it’s a great fight when you find them.” 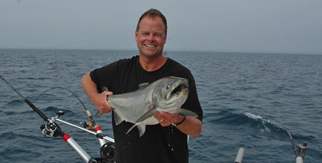 Over the years of fishing, Keating has seen a lot of changes.  “Back then fishermen were more intuitive… We didn’t have the network of communication between guys on Lake Ontario and Lake Michigan.  We didn’t have sonars like we have today with the nav systems.  You really had to pay a lot more attention when you were fishing.  You had to pay more attention to the water and the bottom topography.  On Lake Michigan, the water was definitely darker, it was more stained.  That influences the lures we use.  I believe fish can see from a lot further distance in Lake Michigan.  They can actually zoom in and hit our baits from a greater distance than ever before.  The biggest change we’ve seen is we have a lot more fish offshore.  Back in the 70s and 80s, most of our fishing on the west side of Lake Michigan was within three miles of the shoreline.  The past few years, especially during the summer… guys will think nothing of making an 8,10 or 15-mile run.”

Heading out further has caused some charter captains to turn to diesel to power their boats.  Keating says the move to deeper water is due to a number of reasons.  “The water is clearer.  The lake warms up at a different rate.  It’s much clearer water so it’s harder to warm up compared to stained water which absorbs the heat faster.  I think there’s more bait offshore.  I know the alewives are in flux.  Their populations go up and down.  The years when we don’t have a lot of large alewives on Lake Michigan, there are a lot of small and medium-sized alewives.  They tend to get blown offshore and spend a lot of time over deep water… Salmon are opportunistic and they’re going to find the bait.”

Keating still resides in the Chicagoland area. His home port is Winthrop Harbor, Illinois.  “You have the best of both worlds on Lake Michigan.  If you go south out of Winthrop Harbor, which is on the Wisconsin-Illinois state line, you get into the Illinois side and it’s much shallower.  If you go off to the northeast into Wisconsin, you have deeper water closer to shore.  So it gives you some good shallow water structure and access to deep water without getting crazy as far as how far you have to run.  You get a really good mixed bag of fish.”

What’s in the mixed bag changes as the season progresses.  “Typically we start out with cohos.  The coho fishing depends on how severe the winter is.  Sometimes it doesn’t get going until May.  This year it got going in April… So we start out with cohos and then usually around the second week of May you’ll get a wave of kings moving through the area.  I believe these are the naturally reproducing fish, the fish that spawn… They tend to migrate out of the southern basin and we’ll get a little shot of them.  Some years it will be a big shot.  Some years it will be scattered numbers.  The middle to end of May you have great multispecies fishing.  You still have coho and you have kings underneath them.  Offshore you have steelhead and lake trout.  Then you get into June and we have our June swoon… it’s a transition month.  It’s a wildcard.  Some years the cohos will stick around and the June swoon isn’t too painful.  But if the cohos depart we’re transitioning to deeper water and we’re looking for kings and getting more lake trout and we’re starting to see steelhead move into the area.  The months of July and August are two solid months in this area and it’s a mixed bag… Ten years ago it was predominantly kings.  Now you’ll have windows when there are kings around.  But when there aren’t kings around you’re targeting steelhead, cohos, lake trout, and the occasional king.  In the fall, up by Kenosha and Racine, they have runs of kings and the deep water comes alive with immature kings, from five to fifteen pounds.”

Captain Dan Keating was a recent guest on the Great Lakes Fishing Podcast.  To hear the entire conversation, click the player below or visit our podcast page to listen to all episodes.