Bill Hilts Jr. has witnessed decades of fishing on Lake Ontario.  As Outdoor Promotions Director for Destination Niagara USA and the Niagara County Fish Program Coordinator, he focuses on the Niagara River, Niagara Bar, Wilson and Olcott ports.  But he is also president of the Lake Ontario Sportfishing Promotion Council, which covers the entire New York shore of Lake Ontario. 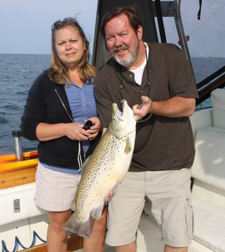 Hilts says Lake Ontario is well known for king salmon fishing but kings are not the only species thriving.  “One of the best things about Lake Ontario is the diversity.  You can go out there and target brown trout, you can target steelhead, you can target salmon, and still be able to pick and choose what you want to go for on any given day, in fact, the same day if you want to.  We have some rather unique aspects because of the Niagara River.  The Niagara River is the biggest single flow of water coming into Lake Ontario, providing about 80% of all the water in that lake.”

People travel from all over the world to fish the Niagara Bar.  Incredible structured coupled with the right currents keep fish on the Bar.  “The Niagara Bar is second to none as far as spring salmon fishing.  It’s one of the locations that derby fishermen and tournament fishermen will target early in the year.  We’re blessed to have that here.  In the spring it attracts a lot of the forage base.  As a result, those predator fish will show up.”

While the Niagara Bar continues to be a favorite, Hilts says salmon fishing is improving across the entire lake.  “Because of all the pen rearing projects we’re seeing and also natural reproduction of salmon in the lake coming out of the Salmon River Fish Hatchery and the Salmon River itself, we’re seeing a lot better spreading out of those salmon.  A good indication was last year for the spring derby, which is usually won by somebody in Niagara County year-after-year, last year it was Oswego County that won it, although quite a few of the fish came out of Niagara and Orleans counties.”

The New York Department of Environmental Conservation(DEC) has been conducting creel surveys on the lake.  The results show that Lake Ontario fishing is as good as ever.  “2018 was the highest catch rate of salmon that they’ve ever seen in the lake.  And not just salmon but also the top 3 fish species in the lake, it was also the highest catch rate.  So when you start lumping in brown trout, steelhead, and even coho salmon, the fishery has been very good.  We haven’t seen all the numbers for 2019 yet but it looks like it was better than 2017 and 2017 was a record year(at the time) as far as catch rate for salmon.  So when you look at what’s happening, in addition to some of the issues we’ve had to deal with as far as the high water levels, the fishing has never been better out on Lake Ontario.”

The lake levels on Lake Ontario continue to be a point of contention.  Hilts says some media reports urge people to stay off the lake due to high water.  While access can be a challenge at times, getting on the water is rewarding.  “If you’re a hearty fisherman and you want to get out on the lake, you’re going to find a way to get out there.  Every single launch ramp in Niagara County was open but sometimes you had to adapt.  You had to wear boots to get your boat into the water… But once you got on the water it was a heyday out there.”

Bill Hilts Jr. is a recent guest on the Great Lakes Fishing Podcast.  To listen to the full conversation, click the player below or click here to check out our podcast page and listen to the entire audio library.