Captain Ed Retherford of Trout Scout Charters has been on the water his entire life.  He grew up in Michigan and if he wasn’t on a lake, he was wading streams.  “My grandfather started me back in the late 40s… I was only one year old but he put me on a boat.  He said I was hooked on fishing but unfortunately he passed away the next year.  My family has always been active in the outdoors and they were avid trout fishermen… in my younger years I grew up river fishing and fly fishing.” 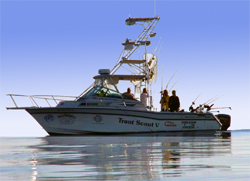 Retherford decided to get into teaching as a college student.  That brought him into biology at the same time salmon were being introduced into the Great Lakes.  The timing couldn’t have been better.   His senior paper detailed coho salmon growth rate.  “We had to have a paper to graduate.  It was a small school, it was Olivet.  I got on the phone and called Michigan State.  I actually got a hold of Dr. (Howard) Tanner.  He directed me to the Harrietta Hatchery.  So I drove up there with two great big jugs and got 25 smolts and brought them back to Olivet.  I had ice in them.  At that time we didn’t have an aerator.  I put them in a tub, kept them cool enough, and started to grow them.  At the same time, they were catching some coho up in Marquette on Superior.  I was able to get stomach samples and scale samples.  I did a scale read from the beginning up until they were about a year and a half and did a comparison on the growth rates.”

His first job out of college took him to Alpena.  He was started guiding on the Au Sable in 1969.  “At that time it was the start of the salmon runs along with the steelhead.  Then they planted brown trout in Alpena.  That was right in my backyard.  We became a world-famous brown trout fishery along with the other fish.  I made that my life for ten or fifteen years.  I was also boat fishing.  I started fulltime chartering in the early 70s.”

Brown trout fishing was fantastic for over a decade.  Retherford says a number of factors led to the decline in brown trout on Lake Huron including a change in broodstock at state hatcheries and invasive species changing the lake.  “We started having invasive species and changes happening in the Great Lakes in the mid-90s.  The brown trout plants started to decay or fizzle out as far as survival and basically, they stopped planting them.”

When the alewives crashed in the early 2000s, the king salmon fishery suffered as well.  “When it crashed, those fish were like 36 to 38 inch long fish and they were lucky to weigh nine pounds… They would have great big heads and long bodies.  They were starving themselves to death.  We had to adapt.  Our go-to fish at that time was lake trout and walleye… We were still catching a few steelhead.  We had a fairly good mixed bag.”

King salmon have started to come back and Atlantic Salmon are being planted to supplement the catch.  Retherford believes baitfish are starting to recover as well.  Lake Huron could be the next Great Lakes comeback story.  “I know a lot of people want to come and catch chinook.  We can catch seven different species in one day.  A lot of places can’t advertise that… I’m catching walleyes in 100 to 150 feet of water.  We fish in different areas than we used to fish as far as the water column.  One day I might catch Atlantic salmon, I might catch steelhead, I might catch pink salmon, coho, chinook, lake trout… that’s quite a mixed bag.”

Captain Ed Retherford was a recent guest on the Great Lakes Fishing Podcast.  To listen to the full conversation, click on the player below or go to the podcast page to listen to all episodes.