Rob Wendel is widely known as a true ambassador of the Great Lakes kayak fishing world.  He can be found regularly at Lake Michigan Angler in Winthrop Harbor, Illinois.  His Instagram feed offers a glimpse into the world of kings, cohos, browns, and more from a boat less than half the size of an economy car.  After shore fishing most of his life, Wendel’s introduction to kayak fishing was driven from a desire to explore further.  “Back when I was in college I was a shore fisherman and I was kind of sick of being stuck on shore.  I thought I could throw a couple of rod holders on a kayak and paddle around and catch some fish.  Eventually, I went and bought a kayak and that’s exactly what I did.  The day I bought it I went straight out on Lake Michigan and caught a 13-pound king salmon and from that point on I was addicted to it.” 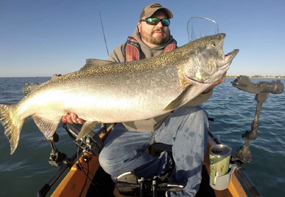 Wendel’s first trip was about 15 years ago.  At the time, kayak anglers were a rare breed.  “It was incredible.  I did all the things you’re not supposed to do.  They tell everybody to get used to your kayak, learn about it, take on small water first, learn how to get back into it, do all these things before you take on a big body of water like Lake Michigan.  Back then there was nobody to tell me that stuff.  So I just went straight onto the lake.  It was really windy that day, a straight west wind… I should have never gone.”

It was a mess, but luck was in his favor.  “I was trolling three rods with dodgers for cohos.  I lived right on the lake and the charters had been catching cohos right in front of my apartment for a week… I had to get out there.  I was trolling east and going way too fast because the wind was pushing me so hard.  I looked over my shoulder and realized I was pretty far from shore.  So I turned around and when I was going back into the wind I slowed down enough to catch a fish.  I don’t think I was heading west for more than five minutes.  I had a spinning rod flat-lined with a J9 Jointed Rapala and it started screaming line…  That fish towed me around for a while.  The wind pulled me one direction and the fish towed me another direction.  My other lines all sank and got tangled and twisted up… I don’t know how long it took me to land that fish but eventually, I got it into the net.”

Although Wendel’s first trip was successful, he caught a nice fish and had no major setbacks, he does not advise starting the way he did.  “If you’re going to start fishing Lake Michigan in a kayak, don’t take it straight onto Lake Michigan.  Take it on a small pond.  Get comfortable with it.  Learn how it handles.  Dump it.  Flip it over.  Practice getting back right side up and getting back into it.  That’s a really important skill to have.  Not all kayaks are easy to do that with.  I’ve been using a “sit on top” kayak for the past fifteen years.  Those are really beginner-friendly kayaks.  They’re really good for fishing because they have a lot of storage and they don’t get swamped.  They’re not like the traditional kayak where you’re sitting inside and you might have a skirt like a sea kayak.” 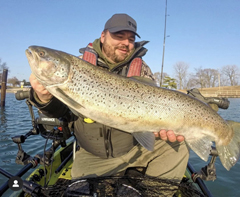 When shopping for a kayak for fishing, Wendel says to pay attention to the stability of the kayak.  “There are two types of stabilities with kayaks, primary and secondary.  Primary stability will make you feel really stable but you’re only going to go so far before you tip.  A kayak with a lot of secondary stability might feel tippy but it’s going to go a lot further before you’re going all the way in.  Those are things you need to learn with your kayak.”

In addition to a kayak, a few other pieces of equipment are needed. “I use Ram Mount rod holders.  I have two in front of me and one behind me.  Those are strictly for trolling.  I have a couple of other rod holders for storage.  I have a sonar and a GPS, you need to have that out there.  A handheld radio, safety equipment, and flares… obviously a PFD but you don’t need a ton of stuff.  Not nearly as much as in a boat.”

Obviously, motorized boats can cover more water and offer more safety when weather conditions change.  But Wendel says there is a multitude of advantages to fishing from a kayak.  “One main difference for me is that it’s totally silent and the fish really have no clue we’re there.  We can catch fish that the boats can’t fish.  Most people think about that factor when it comes to small waters that boats can’t get into.  But it makes a difference on Lake Michigan, especially when the fish are shallow.”

Rob Wendel was a recent guest on the Great Lakes Fishing Podcast.  To listen to the full conversation, click the player below or click here to go to the podcast page.