Captain Paul Powis from J&P Fishing Charters in Erieau, Ontario has run charters for over 30 years.  Lake Erie has evolved over the years and Powis continues to stay dialed in on the best bites on the lake.  One of his favorite, lesser-known fisheries on the lake is steelhead.  “Erieau is on the north shore on the Canadian side out of Ontario.  We’re directly across from Cleveland, about 55 miles.  We’re a little west of Pelee Island.  Typically, Erie

is known for its walleye fishery but we have a bonus catch which is the rainbows or steelhead.  It’s pretty good.  We can fish the same tackle, same spot, same everything… We take both species because the rainbows fight like crazy and jump and pull.  The walleyes are really good to eat.  It’s a double whammy.”

While a mixed bag is common, Powis adjusts his tackle when steelhead are in the area.  “For most of these fish, the main baitfish is smelt or shad.  Some guys will use a crankbait or body bait as a smelt or shad imitator.  They can catch walleyes and they can catch trout.  But a trout with a bait that has several sets of hooks… typically what happens is they get one set of hooks in their mouth and the other side is in their head and they end up tangling everything.  To avoid that, because we have no control over what’s going to bite the bait, we do mostly a spoon bite.  So we run spoons off the downriggers.  We’ll run spoons off the dipsies.  We’ll run planer boards with spoons.  I’ve pretty much shied away from the body baits because you lose too much tackle and too many tangles.”

The bite gets hot on the central and eastern portions of Lake Erie as temperatures rise.  “The beauty of Erie, as everyone knows, the population of walleyes has exploded.  There are a couple of factors that contribute to those fish being there.  One is that it’s deeper.  The central basin of Lake Erie goes as deep as 80 feet.  If you’re in the western end, it’s a lot shallower.  So what happens is the water pours out of the Detroit River, it falls into there and it’s a good spawning ground in the Pelee Island-Colchester area… When that water warms up the bait doesn’t like it and the walleyes and rainbow trout will follow the bait.  The bait is looking for cooler and deeper water.  That’s when they show up in the central basin.” 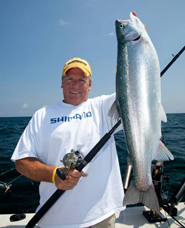 Powis’ spread is pretty simple on most days.  He puts more lines in the water as fishing dictates.  “As trollers what we do is put a little bit of everything out and see what works.  That tells you what doesn’t work.  Typically my spread will be a couple of riggers.  Then I will run multiple dipsies.  I’ll run a #1 dipsy on the inside, then a two, then a three… I run three per side.  The fishing has been that good the past few years that I can get away with 8 rods.  But if things are off after a cold front or whatever, I’ll put the boards out too.  I can run five there.  So, I’ll put out up to 18 rods if we’re really trying to figure it out.  As the box starts to fill, we’ll start pulling rods and concentrate on areas.   With the big planer boards in the spread, we cover a lot of water but turns take a quarter to a half a mile.  So if I’m on a certain bait ball with really active fish, I’ll pull the boards in and just fish the dipsies and the rigger so I can work tighter circles.”

Powis covers a lot of water.  The biggest factor in finding the fish is water temperature.  “Early in the year, we’re closer to shore.  But as the weather warms up in late July or early August when your starting to get those high 70s or low 80s water surface temperature, you want to find that colder water for the bait.  Generally, we’re fishing in 40 to 60 feet of water, and they move up and down the column within that.  Temperature dictates exactly where they are.  If we get a big north wind, it pushes the warm water out and the cold water comes in and vice versa.  There’s a lot of current and there’s a lot of variances in that temperature as well.”

Captain Paul Powis is a recent guest on the Great Lakes Fishing Podcast.  To listen to the full conversation, click the player below or visit our podcast page.