Captain Jim Steel of Dream Catcher Sportfishing charters and Innovative Outdoors has fished Lake Erie’s Eastern Basin for decades.  He remembers when Lake Erie was essentially left for dead. “Zebra mussels, when they first came in it was something that came from the bilges of freighters and the original thought was that it was going to kill the lake.  But at that point, back in 1970, the lake was considered a dead lake. To me it was like, 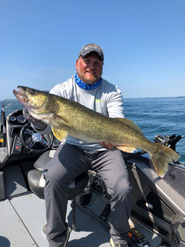 we’re not really ruining anything. It’s already broken. You didn’t want to eat any of the fish. The zebra mussels started getting in there and killed off a lot of the vegetation.  Which was the bad vegetation. It was holding all the chemicals and everything. It was almost like a shock, kind of like shocking your pool. It killed everything off and then it started to rebuild. We started getting weed beds back in, baitfish were there, and everything started turning around.  We started getting more numbers and the management started kicking in. It’s been a boom. Record hatch after record hatch. The zebra mussels are pointed at the top so when the walleyes drop their eggs, they actually drop between the points so they’re protected from the fish that are trying to eat the eggs.  It’s a win-win situation with something that was supposed to be terrible. We went from a dead lake in 1970 to, the federal government says it’s one of the cleanest lakes in the nation. That’s incredible in 50 years. It went from don’t eat the fish to have one a month to now it’s have as many as you want.”

Like most anglers, Steel got his start on the banks and docks.  When he started boat fishing on Lake Erie, he was focused on salmon and trout but as walleye fishing has grown on the lake, Steel’s target species has changed.  “I was more into salmon and trout. Back when I got into it, when the walleyes were here, they were here. Guys when out and got them. When they weren’t here, they weren’t here.  I would go back to salmon. Then the numbers started getting better and the techniques got better. It was a lot more fun. Now we live it and breathe it every day.” 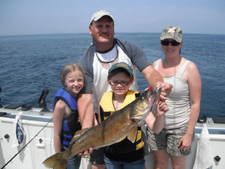 Steel is based out of Dunkirk, New York.  Based on harvest numbers and population data from the New York DEC, the good ol’ days are right now when it comes to walleye fishing on Lake Erie.  Steel concurs. “It’s better than it ever has been. It’s estimated between 42 and 43 million fish(walleye) across the lake and about 250,000 resident fish.  A lot of people ask, “what is the hot spot?” Right now, anywhere on the lake. “What depth do I fish?” Top to the bottom. “What baits do I run?” Just about anything out there.  It’s a great thing!”

What Steel likes about the Dunkirk area is the variety of structure and species available to anglers.  “You’ve got shallower structure so you can get into the bass and walleyes set up on structure. You can push off shore a little bit and get into steelhead and browns in spring.  Then push out deeper and get into lake trout. Our numbers in New York on Erie are 700,000 for lake trout and we’re getting them up to 20 pounds while we’re catching walleyes.”

Want to learn more from Jim Steel about the eastern basin of Lake Erie?  Check out the full interview by pressing play on the podcast player below.