Captain Richard Hajecki from Crazy Yankee Sportfishing loves Lake Ontario brown trout fishing.  “I’m one of the first boats on the lake every year. I just can’t wait to get fishing. In the beginning of March and April, I’ll fish out of Rochester on the Genesee River.  And then I’ll move the boat for the month of May up to Wilson Harbor which is by the Niagara River and the Niagara Bar which is famous for a spring salmon bite. And then after that, I 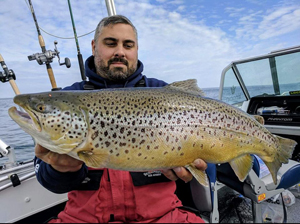 move the boat to Oak Orchard which is kind of between the Niagara River and Rochester.  I’m pretty much a western basin fisherman. When we’re not chartering we’re fishing tournaments around the lake from Toronto to St. Catharines, Canada… and Wilson, Oak Orchard, and Rochester.”

Hajecki says you can target brown trout in shallow water as long as there is open water and the weather allows it.  He is going after browns as early as January. “The cool thing about spring browns is they are right on the shoreline, typically in less than 15 feet of water.  No matter what kind of boat you have you can get out there and chase them. You have to pick your days. In the spring we get a lot of weather. As long as there’s a south wind, the way Lake Ontario lays, the south wind is a very easy wind to fish out of.”

The weather can be unpredictable early in the year and boaters should always be cautious, but Hajecki says a dirty water situation is a prime time for brown trout.  “The best time to fish them is after a blow(wind event) or after a good rain when you’ve got water coming in from the creeks. The dirty water holds the heat from the sun.  So you have maybe a degree to three or four-degree difference and the browns get packed into that dirty water. So if you keep trolling through there you’ll have a successful day.”

When it comes to spring brown trout fishing, the setup is fairly simple.  “Most of your lines are all flat lines. You’re using little stick baits, anywhere from 3 to 4-inch stick baits that dive three to seven or eight-foot.  The stick baits you’re letting out anywhere from fifty to one hundred feet behind a board. The planer boards will hang out to the side of your boat. We can run three or four lures on the side of the boat.  We also run a small spoon behind a dipsy diver. We’ll run those out anywhere from eight to ten feet. Those are usually really good when the water is dirty. One of the key things with spring brown trout fishing is finding a little bit dirtier water.”

The great thing about fishing brown trout in the spring is the simplicity.  It’s nice to have specialized equipment and electronics, but you don’t need it.  “If you’ve got spinning rods, trolling rods, baitcaster rods, you can do this kind of fishing.  There were years when I had a bass boat that I would just run the creek mouths. I would cast stickbaits into the creek mouths and catch them which is a lot of fun too.  But the trolling aspect is very simple. You could go out there with a boat that has two rod holders, stick two rods in there with lures hanging out the back and just troll around and be successful,” said Hajecki.

When it comes to speed, Hajecki says two miles an hour is usually spot on.  “Since we’re fishing so skinny(shallow water), we’re not dropping a probe down there because it shouldn’t change that much.  There isn’t that much current in ten foot of water. When the water is really cold we might drop down to 1.8 on GPS. But typically we hang out at 2.0.  But you can fish them as fast as you want. I’ve got friends that will fish three miles per hour on GPS and they won’t pull stickbaits. What they’ll do is the same thing with the planer boards but they’ll put a small split shot in front of a trolling spoon and they’ll troll a little faster.  That’s a different presentation and they’ll do just fine at three miles an hour.”