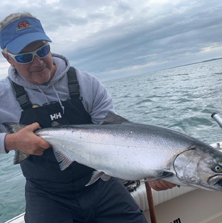 Lake Ontario is a premier fishing destination.  Anglers travel from all over the world to tame the famed waters of the lake.  Captain Vince Pierleoni from ThrillSeeker Charters has fished Lake Ontario for decades.  “I got started in the charter industry in 1984. We’re a fulltime operation fishing Lake Ontario and the Niagara River.  My home port is Olcott(New York). The major current is pretty tight to shore there so we have pretty consistent fishing.”

An abundant population of king salmon is the headliner for most anglers on Lake Ontario.  But it wasn’t always that way. “I have watched the angler effort go from just hoping to catch something to targeting the first big population of lake trout so that they could move their rods readily to today where chinook salmon is the major player and most of the effort is going there.  We don’t have a huge population of coho. We would like to see that change but it’s primarily chinook salmon effort and they definitely bring in the people. That brings a good shot to the economy on the south shore of Lake Ontario.”

The popularity of the chinook has helped grow the sportfishing industry on both the Canadian and US side of the lake.  The potential size of the fish is definitely a factor but Pierleoni believes there’s more to it than that. “It’s two-fold.  Now that they have the alewives under control, there are still excessive numbers of them regardless of what’s been heard, but they’re not to the level where the fish are overly fat.  The fight of the fish has improved. The edibility of the flesh has improved. The population of chinook is adapting. We now have naturalized chinook that has spawned on their own as well as supplemental stocking to help areas that don’t get the natural reproduction.” 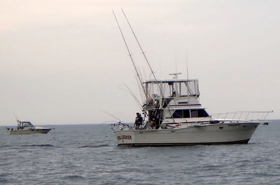 Salmon have been successfully stocked in the Great Lakes for about 50 years.  But most experienced anglers will tell you the fishing has never been better than it is right now.  Pierleoni says there are several factors involved. “When they improved the baseflows in the Salmon River, that really seemed to help.  It didn’t go through the crazy fluctuations, which left some of the beds high and dry at times. That’s a big factor. Habitat has definitely improved.  Our water quality is excellent. The tribs, there is an effort constantly to improve those. The problem on the western end is we have a lot of dams or I think we would see even more.  There are streams on the north shore in southern Ontario that get natural reproduction also. They’re just high-quality streams that go for miles and miles.”

King salmon are the most highly sought after fish on Lake Ontario.  But they’re not the only show in town. “Brown trout is very popular.  Some of the biggest in the world are coming out of the Great Lakes and Lake Ontario definitely has its share.  Steelhead, they’re an incredible fish. I know there’s quite a bit of an effort given to steelhead in the tributaries.  Unless you’ve fought them in open water, I don’t think you’ve ever seen what they can do. We also have lake trout which is a federal effort all through the Great Lakes to restore lake trout.”

Hear more from Captain Vince Pierleoni on the Great Lakes Fishing Podcast by clicking play on the audio player below.  Go to our podcast page to listen to our entire podcast library.