Captain Pete Alex has been running a boat on the Great Lakes for over 30 years.  His charter, Vision Quest Sport Fishing, operates out of Erie, Pennsylvania on the shores of Lake Erie.  The walleye fishing on Erie is world-renowned and Alex and his clients enjoy partaking in the abundant walleye population.  But walleyes are not the only show in town.  Captain Alex says the lake trout fishing, although not as highly publicized, can be 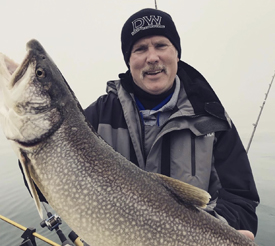 outstanding.  “Out of Pennsylvania, we have a really good lake trout fishery, especially in the spring and fall.  Our fish commission and a federal program combined to commit to about 150 to 200 thousand lake trout annually.  They’re constantly stocking the lake with lake trout out of Erie, Pennsylvania.”

Stocking efforts were necessary to bring back lake trout to Lake Erie.  While big numbers of the great fish exist now, it wasn’t always the case.  “It was a native species.  It took a big hit back in the 50s & 60s.  The lamprey eel put a big dent in the population.  The lake trout population plummeted on Lake Erie, to the point of extinction.  The federal people got involved and wanted to make sure that lake trout were restored and are committed to that restoration and continued stocking program.”

Alex believes the lake trout rebound is due in large part to research and a reliable food source.  “Gobies have provided an instant forage base because our smelt population which they fed on years ago declined.  I think the gobies replaced them as far as a baitfish.  There is a variety of strains of lake trout.  There are seven to eleven different strains.  Our fisheries people are constantly doing research to find which strain survives the best in Lake Erie.”

When it comes to timing the bite, Alex says the spring and fall can’t be beaten.  “It is usually the latter part of April through the whole month of May.  Then the focus turns to walleye with some steelhead mixed in.  Once walleye kicks in people kind of forget about lake trout.  They move out deep, start to scatter, and migrate towards the deep water in New York so they’re a little harder to target but most people want to chase walleyes that time of year… Once we get through the summer months… the waters cool off and those lake trout that abound all over Lake Erie in the deep haunts kind of work their way back in during mid-October and they’re coming in to spawn.  They come in to spawn in water under 30 feet.  They find some structure and spawn.  They’re a relatively easy fish to target in the shallows once you get into that latter part of October and the whole month of November is great lake trout fishing.” 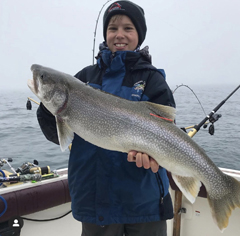 The spring spread Alex uses is diverse.  He’s using a wide variety of presentations.  “We’re using a lot of lead core with spoons.  We’re using the old school method of dodgers.  We bring back the old dodgers from the coho salmon days.  They are extremely effective.  We mix in some cowbells.  We’re running a lead core program off boards, downriggers, and dipsy divers.”

One aspect of spring fishing for lake trout that Alex enjoys immensely is the challenge of the bite.  “What’s pretty neat about our lake trout fishery in the spring is it’s not a given.  It’s not easy.  They could be in closer to shore in what we call the first fifty, the first fifty foot of water as you move out from shore.  Or they could be out near a piece of structure where there is a significant drop, that’s the second place they’ll hang out in that latter part of April into mid-May.  They will start to transition from in to out at some point and amass out there near this drop.  They will move around.  They’re not in one spot all the time… You gotta hunt a little bit.”

They say the good ol’ days of walleye fishing in Lake Erie are happening right now.  Judging by the size of the fish, that may be the case for lake trout as well.  “The lake trout can be anywhere from six to 27 pounds.  Our state record was broke in 2019.  I think it was just under 30 pounds, a nice fish.  We’re seeing a mix of fish from six to the mid-twenties.  A mid-twenties fish is a good fish.  We don’t see a lot of them but they’re there.  Our average lake trout are eight to 14 pounds.  That’s the most abundant size in spring or fall.”